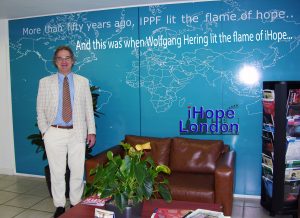 onal Helpers; Operation Prayer for Europe/England saying that it is time and it is urgent.  However a vital condition was attached to his commissioning of this mission for their own protection and the success of the mission. They needed the blessing for the mission from the Archbishop of the diocese where the HQ is situated.   In prayer they requested a meeting with Archbishop Peter Smith which was granted very promptly.  The meeting was a complete success and after the blessing it was full steam ahead.

They decided to visit IPPF HQ in London to see what exactly it looked like and what kind of reception they would get.  They 1st went to the registered HQ in swanky Regents Park only to find out that IPPF had moved to Newhams Row, Bermondsey less than a mile from the Tower of London where many innocent people were legally tortured to death by the state.  The location seemed ominous and the building ill suited. They entered but were not able to speak to anyone apart from the receptionist.  The area looked like the descriptions given in the 60s and 70s of the kind of place where back street abortions were happening.

After forming a special team of prayer warriors committed to peaceful prayer and hearts of love for the mothers, babies and the IPPF workers, they arranged for the purging team of men to cleanse the area with fasting and night prayer.  The IPPF workers are not there at night but evil is still very much present.  It was for this reason the purging prayers were needed, this is some way was akin to a priest when he purifies sacred vessels. 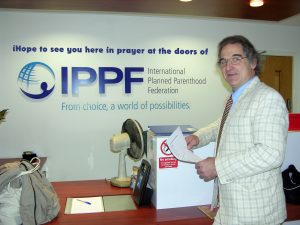 The mission is launched as they meet at the HQ of IPPF at midnight 12th of December of 20012 with a number of friends of the unborn from across Europe.  It was the coldest night of the decade and the silver glint on the rough tarmac ground was still as frost clung to it while each two 2 manned prayer teams prayed the rosary for a total of 6hrs.  03:00 would be the changeover time from 1 team to the other.  Then they would go to 12:30 Mass at the Cathedral where they would get a blessing for their work and as temples of the Blessed Sacrament they would process

with “the Mother of Life for Europe” to the HQ of IPPF in Newhams Row London.  Relieved at the end but still it lacked something, it needed to be repeated.

This started what would be a developing monthly prayer procession vigil where “The Mother of Life for Europe” would travel to London to lead this developing mission.  Her flight with Wolfgang from Munich Germany was always paid for by Europrolife and collections were requested from other pro-life organisations and those who wanted to support this mission.  The prayers were explicitly for abortions victims and workers of IPPF and to end the organisations provision, practice and promotion of abortions.  It became apparent that prayer worriers needed prayer and protection also.  Yet one morning as the night watchmen leaned on the glass walls of IPPF peering into the foyer their eyes scanning the large map of the world lit by 100s of tiny light signifying their presence in virtually every country.  A sense of questioning the reason for being there facing this huge organisation with all the money it commands, all the influence it has and all the media and political support it possesses, a spirit of deeper prayer came over the 4 men during that change over at 03:00.  It was decided that each country needed to be included in the prayer and also a significant figure in the battle (for or against life) would be identified and prayed for also.    This was a real turning point and significant as there were signs that something was changing.  It looked like pro-life activities were having a few successes including exposing many IPPF scandals and leading up to the election of Donald Trump as US president, which was explicitly the prayer intentions of the night watch and procession vigil in the October 2016 to the chagrin of ‘The Tablet,’ a Catholic rag and other pro-aborts.